The representation of MEGADAPT as a social-ecological system arises from the premise that the risk of flooding, water scarcity and associated health outcomes originate from the double coupling between social-institutional and biophysical-infrastructural subsystems. From this double coupling emerge socio-hydrological risks.

The MEGADAPT model recreates in this way how decisions are made about urban hydrological infrastructure, and how these decisions result in changes in urban climate, hydrological cycling and groundwater resources. By modeling how actors perceive and respond to the effects of their decisions, the model illustrates how actors in the city can modify their mental models about risk and, in turn, their decision priorities in confronting risk 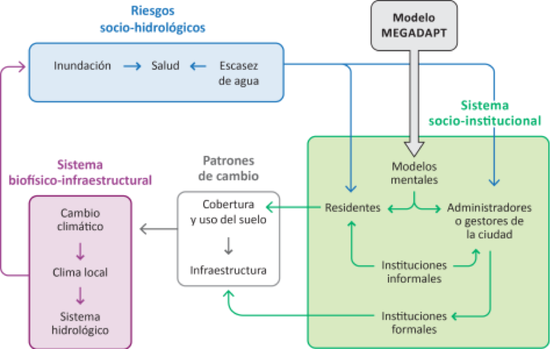 Transdisciplinarity has emerged as an innovative scientific approach capable of dealing with the growing complexity and uncertainty of contemporary sustainability issues. The transdisciplinarity approach spans from natural and social sciences to traditional knowledge and humanities. As a scientific process, it aims to achieve collaborative, interdisciplinary, policy- oriented, and reflective knowledge. Values, experiences and insights from people outside academia are accounted for, while analyzing socioecological systems in different scales. Therefore, transdisciplinarity emerges as an effective step towards interactive and iterative practices between academia and stakeholders. The result is a mutual learning process between science and society aiming for an inclusive and more sophisticated production of useful science.

Understanding social learning is important if we wish to respond effectively to increasingly complex problems, to break down barriers between producers and users of research, and increase the capacity of organizations to learn about socioecological systems. In terms of practice, social learning has a long history associated with natural resource management and food security, where it has served as a means of emphasizing learning and reflexivity in place of conventional scientific management regimes. Social learning is designed to support shared ways of knowing based on 'collective cognition’ as individuals shift their perception of a situation and, through their interactions, develop shared ‘perspectives, insights and values’. Frequently, this will engage actors from multiple (spatial or jurisdictional) scales, bringing different perspectives and effecting broader transformative change via networks of actors at those scales, but also necessitating the negotiation of significant power differentials. Hence, social learning is the collective act of working to develop new understandings of problems in order to produce inclusive solutions.

Boundary objects are objects (artifacts, conceptual models, classification systems, or even institutions, etc.) that allow members of different communities to interact and coordinate despite their sometimes-divergent perceptions of the object (e.g. Star and Griesemer, 1989). Boundary objects involve participation by actors from both the policy and research communities, as well as professionals serving as mediators between these groups. Although boundary objects exist at the frontier of the science and policy communities but are accountable to both (Parker and Crona, 2012). Boundary objects sit between two different social worlds, such as science and non-science, and they can be used by individuals within each for specific purposes without losing their own identity. Correspondingly, boundary organizations attempt to solve problems by providing the opportunity and sometimes the incentives for the creation and use of boundary objects (Guston, 2001).

Colloquially, a mental model is a personal (and often shared) internal (i.e., cognitive) representation of external realities. More theoretically, Jones and colleagues (2011:3) define a mental model as “a cognitive structure” comprised of "representations of objects, their relationships and dynamics as well as the attributes or characteristics of these and the person's valence (cognitive and emotional) to the objects, relationships and dynamics.” Mental models have been studied in relation to risk analysis and communication for some time as a means of evaluating how different segments of society understand risk, and how that understanding leads to specific behaviors in relation to risk. Mental models are increasingly being used in social-ecological research to understand the motivations for and interaction of human behavior in relation to social-ecological dynamics, as well as in understanding social conflict, social learning and governance of social-ecological systems.

The Concept of Vulnerability in the MEGADAPT Project

In Megadapt, we begin with the premise that vulnerability --defined broadly as the social, technological and environmental conditions that generate undesirable outcomes for populations and systems in face of shocks and stress (Eakin and Luers 2006)-- is a product of dynamic, multi-scalar, coupled social-hydrological interactions. These interactions are directly associated with decisions of actors in the system, but also the outcomes of exogenous biophysical and socioeconomic processes, such as climate change and globalization. Risk is defined more narrowly as the probability of an undesirable outcome resulting from exposure to a hazard, given the vulnerability characteristics of a population, place or system. In our project, we focus on socio-hydrological risks, referring to the fact that within the megacity, the probability of negative outcomes cannot be understood simply by evaluating the probability of biophysical events such as extreme rainfall, but rather must account for the interaction of social, political, technological and biophysical processes. We explicitly integrate systems and actor-oriented approaches to vulnerability analysis in order to capture cross-scalar interactions, tradeoffs and transfers of vulnerability among different populations in the study area. This means that while we focus on the differential sensitivities, capacities and exposures of specific sub populations to risk, we are simultaneously analyzing the implications of household-level impacts and responses for the dynamics of the broader socialecological system (SES). Thus, vulnerability in this context must be understood as a product of complex SES dynamics, rather than a simple aggregation of the sensitivity, exposure, and capacity of a city's neighborhoods, businesses, and institutions.

A primary concern in Basin of Mexico’s water dynamics is how addressing vulnerability to water scarcity, flooding and other water-related threats in such a way that vulnerability is not transferred to other populations outside the Basin, to future populations within the Basin or from one sector of the population to another within the Basin. The problem of vulnerability transfers speaks to the fundamental nature of “wicked” problems. There are no concrete solutions or panaceas: there are only transfers and tradeoffs that must be transparently and explicitly considered and negotiated. Increasing robustness at one scale may increase vulnerability elsewhere, to the same or other threats. Most of these forms of transfers are not considered in policy and thus not governed

Megalopolis, also known as megaregion, is an urban agglomeration with a concentration area that reaches 8 million people, and usually comprises a central city with surrounding urbanized localities without administrative boundaries demarcated (Fuchs et al., 1999). According to the definition of urban sprawl from United Nations, a megalopolis “…is an additional geographical unit, which may include more than one locality. In some cases, a single large urban agglomeration may comprise several cities or towns and their suburban fringes”. While a metropolis is a controlled, contained and centralized area with boundaries between suburbs, farmland and forest, the megalopolis is an area without defined limits, and with residential zones, multi-nodal services, workplaces and multiple forms of land use that extend to rural patches around the city through road infrastructure. Megalopoli are also characterized by concentrating a very large percentage of a country’s urban population.